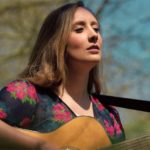 Charlie Limm is a Somerset born and based Actor, Musician, Composer and Theatre Maker who has been performing since an early age. Charlie is an accomplished singer, songwriter, guitarist and Grade 8 Flautist and has been performing on the London scene for 6 years and more recently in the South West as part of the folk duo Patchwork Skies and as a solo artist.

When performing solo, Charlie arranges acoustic folk songs with just voice and guitar, playing mostly her originals with some folksy covers thrown in.