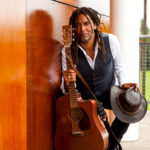 Living in the UK from 4, David a Trinidadian, is mesmerizing audiences round the country. Having broken his violin at 5 & loosing his clarinet on a bus at 8, the guitar by 10 never left his side. Maternal Great Aunt Daisy Voisin toured and recorded in the early 60’s throughout Trinidad & Tobago in the Perang orchestra playing guitar and singing becoming known as “The Mother of Parang “She was explosive, tempestuous, enjoying every moment on stage. Clearly David inherited this. His Father constantly sang in church choirs and around the house, thus his Aunt Daisy and Father had a great influence on David musically.

Armed with poets and songsmiths from George Orwell to Elliott Smith David developed a distinctive and identifiable sound. Specialising in slide and finger-picking his style is both fluid and forcefully rhythmical with powerful vocal that ranges from lush to gravelly. In 1990, David charted at No1 in Ireland with band No Sweat, as their lead guitar player/song writer. Managed by Def Leppard’s Joe Elliott. David recorded and toured in the US and UK on No Sweat’s debut album by super producer Keith Olsen (Tom Petty/ Fleetwood Mac).

David 9 Lunas has been honing his craft, writing and performing extensively throughout the UK/ Europe