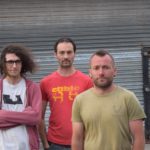 Hoggs Bison are an instrumental rock band from Keynsham. Having had a quieter year in 2018 – mostly due to broken bones and the addition of a synth player – they are back and ready to hit the stage again. Previously toured their debut album ‘Aeons’ around the UK and Europe and describes by Peter Gabriel as ”with a name like that they’d be better off in a zoo.”