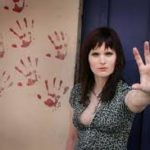 Netherlands born, Bristol based artist Mireille Mathlener has a growing reputation for striking songs with a real captivating, narrative quality and has been compared to the likes of Neil Young and Chrissie Hynde (The Pretenders).