Opera in The Park – Donizetti’s Elixir of Love 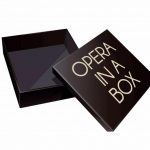 Opera in The Park – Donizetti’s Elixir of Love

Opera in The Park:   Donazetti’s Elixir of Love

The second full opera production in Keynsham presents what is often described as one of the most popular of frequently perfromed operas – and it comes with a summer theme. 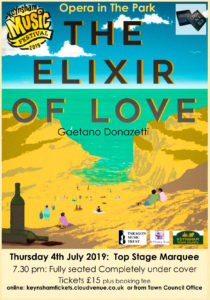 Performed again for us, this year, by Bristol’s Opera In A Box.

Written in haste in a six-week period, L’elisir d’amore was the most often performed opera in Italy between 1838 and 1848, and has remained continually in the international opera repertory. Today it is one of the most frequently performed of all Donizetti’s operas: it appears as number 13 on the list of the most-performed operas worldwide in the five seasons between 2008 and 2013.

The naive Nemorino believes that a love potion will win him Adina’s heart. Blossoming from a shy Italian immigrant to a plucky entrepreneur, he captures both his sweetheart and his fortune over the course of this delightful opera.  https://youtu.be/x4GFvQBR5q0

This production is performed in English.

Opera in a Box is a touring opera company in the South West of the UK aimed at bringing the opera genre to as wide an audience as possible. Take all of your preconceptions about opera and throw them out of the window as Opera in a Box takes opera in fresh and exciting artistic directions.