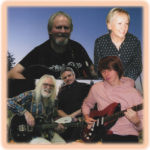 A Keynsham based band with more than a passing reference to that west coast Californian sound, Dan Russell and his band will take you into a timeless head space ……

THE SEVENTH UNIVERSE was formed in January 2019 by Singer Songwriter Acoustic Guitarist Dan Russell…a native of Keynsham…and a songwriter since 1975….his tally so far…1,101! A veteran of many bands and currently recording his 114th album!

Dan was born in Clifton, Bristol….but has lived in Keynsham for the first 19 years  and the last 19 years of his life.