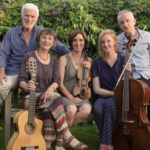 Led by Keynsham’s Helen James, The Summerhouse Band is

Helen James of Keynsham and Paul Barclay from Priston expanded their established duo to form The Summerhouse Band.  The group made their debut performance at the Priston Festival in 2016.   Rooted in folk music, The Summerhouse Band explore the potential of rich arrangements; vocal and instrumental harmonies with songs and tunes from Ireland and Scotland plus numbers from the current and past popular folk repertoire.